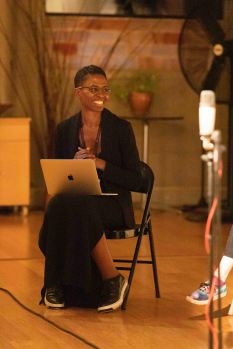 Amy Evans is a writer and educator based in Brooklyn, New York. Her plays include Achidi J’s Final Hours (Finborough Theatre), Many Men’s Wife (Tricycle Theatre), The Next Question (HB Playwrights Foundation), The Big Nickel (Soho Theatre), and The Most Unsatisfied Town (English Theatre Berlin International Performing Arts Center). Her latest play The Champion, inspired by the life of the legendary Nina Simone, world premiered at TheatreSquared in Fayetteville, Arkansas, in October 2017 under the direction of Reginald Douglas and starring Joy Jones. Amy has given workshops at a number of institutions, among them Humboldt University and the Institute of Cultural Inquiry Kulturlabor in Berlin, and is an alumna of Hedgebrook Women Writers’ Residency, BRICStudio Performing Arts Residency, 651 Arts’ Artist Development Program, and Interstate 73 Playwrights’ Group. She has written for Shelterforce Magazine, and her plays and poetry have appeared in anthologies and academic publications in Germany and in the UK. Amy holds an MA in Theatre Arts from Goldsmiths College, University of London. She is currently working on Jet Fuel, a new play about sex, gender, and the construct of “fairness” in elite sports, and a memoir about integration and Black women’s mental health. ‘Protocol,’ an excerpt of her memoir-in-progress, was joint winner of the 2020 Thornwillow Patron’s Prize and is slated for publication in October 2020. (Photo by Erin Bell.)