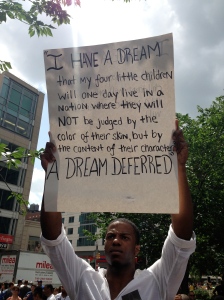 The protests that erupted in Ferguson, Missouri, following the killing of an unarmed black teenager at the hands of state police have prompted a group of New York-based playwrights to speak out.

Six playwrights have been commissioned by The New Black Fest to write 10-minute monologues and performance pieces in response to the shooting of Michael Brown in August 2014. The project, titled Hands Up, will feature new work by Dennis Allen II, Idris Goodwin, Eric Holmes, Nathan James, Glenn Gordon, and Nathan Yungerberg.

Hands Up follows on the heels of a similar approach TNBF took to using theater as a platform for debate. The 2012 series Facing Our Truth addressed the killing of black teenager Trayvon Martin at the hands of George Zimmerman in Sanford, Florida, and featured the work of six writers, including 2014 Kennedy Prize recipient Dominique Morisseau and Winter Miller, author of the award-winning play In Darfur. The series was mounted at the National Black Theatre and the Public Theater in New York and later presented at the Goodman Theatre in Chicago and the Centre Theatre Group in Los Angeles.

What distinguishes Hands Up is the demographic of the contributing artists – all of whom are black men. The purpose of the project, according to New Black Fest artistic director and co-founder Keith Josef Adkins, ‘is for these playwrights to contribute to the current nation-wide conversation and activism to combat police and societal targeting of the black and brown male body.’

For Mr. Yungerberg, the commission is a chance to chip away at pervasive negative stereotypes that distort and obscure the real lives of black men. ‘We have been demonized for so many years, our voice has been replaced with images of violence, anger and sexual prowess,’ said Mr. Yungerberg. ‘I am hoping that people might leave with varied perceptions of the black male experience and a willingness to engage in healthy conversations about it.’

Hands Up will premiere at the Martin Segal Theater at the CUNY Graduate Center on November 17, 2014.