Dessau or “The Most Unsatisfied Town”

I recently read that the town of Dessau was declared Germany’s ‘most unsatisfied town’ by the magazine Stern in 2003. Six years later, I wonder how much this has changed. Dessau is host to the Bauhaus Institute, Germany’s Federal Environmental Agency, and the Hugo Junkers Technical Museum. It is also home to 15% unemployment (approximately twice as high as the national average) and two well-known incidents of racially-motivated violence — the murder of Alberto Adriano and death-in-custody of Oury Jalloh — which have marked the town as a ‘no-go zone’,  a label many locals seem very anxious to shed.

I am currently at work on a new play inspired by the tragic death of Oury Jalloh. The process of gathering source material for my writing led me to explore a city that I would have avoided at all costs not very long ago . I made my first visit to the town last weekend where I attended the premiere of a new film by director, writer and actor Maman Salissou Oumarou (Mama, Oury Jalloh and Gebratene Tauben). I’ve attached images here and will return later with more impressions …

A board on the sidewalk in Dessau, promoting its image as a place full of potential. 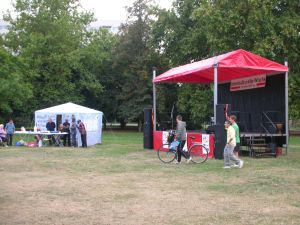 Police officers on watch beside the Alberto Adriano memorial in Stadtpark Dessau. 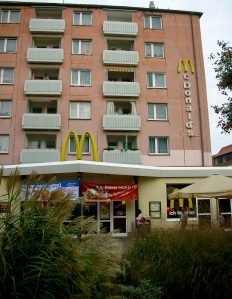 A McDonald’s sign scales the wall of an apartment complex in Dessau.

← Universal Health Care: What’s not to love?
Uptown Dessau and the Mason-Dixon Line →